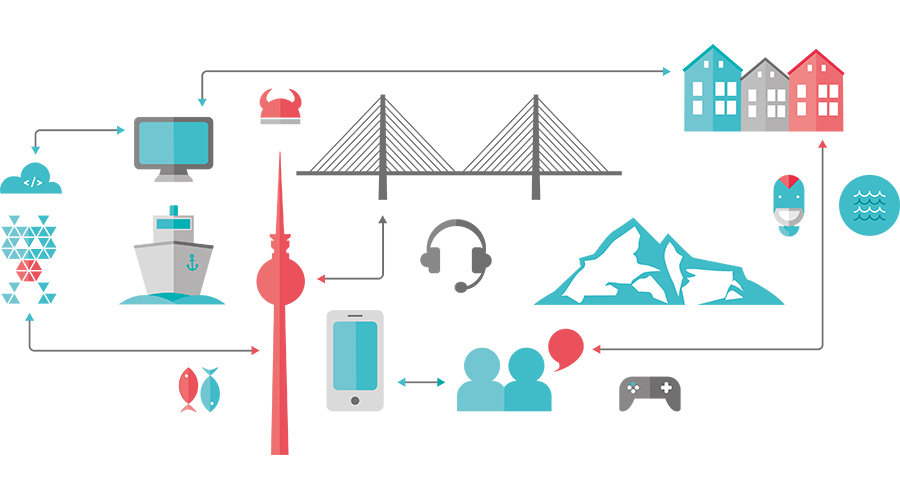 A black and white picture of striking shipyard workers holding a banner was projected on the wall. The picture resembled those from the English Midlands and the German Ruhrgebiet Ann illustrated the harsh reality of Malmö in the 80’s. Luckily, it has nothing to do with Malmö’s colorful contemporary reality. That was very obvious on the second day of 25 h Malmö, while we attended a short lecture in a hotspot for entrepreneurs called MINC about the successful development of Skåne, the South peak of Sweden.

On day One we learned how Malmö, the countries third-largest city, reinvented itself in the recent past. Once steel, ships and heavy industry, now games, creative solutions and digital enterprise. The first impression was Media Evolution City, a cluster with 500 members, a roof for 100 start-ups, a central neural system for the local tech scene. The impressive building alone was a symbol, a mechanical workshop for ships that was turned into a digital engine room made of brick and glass, a fusion of Sweden and Silicon Valley.

The warm welcome of Sara Ponnert and Emma Estborn (both Media Evolution City) and Stefan Johansson (Invest in Skåne) were followed by presentations that showed what the region is capable of right now. Material science, clean tech, packaging and logistics – Stefan Johansson rushed though the namedropping part of his presentation. Either companies originated from Skåne like Tetra Pack (silly me always thought it was German) or have their headquarters here, like the communication section of furniture giant IKEA.

After that we were introduced to interesting Media Evolution start-ups. Marcus Olsson, the CEO of Technium, presented an ambitious VR platform project, combining many 360 degree movies in one experience. Also he compared the straight German way of doing business („Follow the agenda“) with the Swedish way (lots of discussion and finding consensus in confusion). Probably this is how we often see the best in others and the worst in ourselves. We know own confusion too well and rarely look behind the curtain at other companies.

Andrea Arvidsson of DocLounge showed an encouraging presentation of how people get together to watch documentaries if the content and the presentation is right. Martin Walfisz is former founder of Massive Entertainment. He left the Swedish gaming behemoth in 2009 and now is working for Nordisk Film Games, the investment fund for games at Nordisk Film. it was just the tip of the iceberg but represented the creative potential profoundly.

More than just a little late – presentations and networking can be intensive and time consuming – we headed across the river to visit Ustwo, the creators of Monument Valley, an indie puzzle game smash hit that was even part of the TV show House of Cards, because, you know, Frank Underwood just loves his games. Ustwo has clients like Adidas and Google and prepared a design thinking session for us, with pens in glasses and blank paper sheets on the tables. So how disappointing to realize that due to our late arrival, Zofi Holgerson and Frederik Wallin only had time for a short talk in which we were told the secret behind Ustwo lies in the „working culture that unleashes the collective genius“. And that they’re are always looking our for good people because: „Developers don’t grow on trees.“

Our last stop for this day was Massive, with 400 employees – and 200 more to come in the next year – the biggest game developer in South Sweden. They definitely seem to grow their developers somewhere. Managing Director David Polfeldt was a compelling speaker, straight and serious and funny and humble, a rare combination. He told us about his theory why despite of its size, Sweden is so good at making games. In short: mindset plus breathing American culture since WWII plus a governmental computer program in the 80’s plus X. We touched many subjects – growth, diversity, Germany, work/life-balance, control over production – and it was clear why Massive is indeed massive.

Our evening at the fantastic Boulebar in the center of Malmö started with networking and sparkling wine and continued with more networking during one of our all-famous media.net matchmaking dinners. Swedish and German shared French food and insights, exchanged business cards and finally made up ridiculous team names to play Boule until 11 pm. It was rather civilized, the party ended and everyone went back to the hotel, because the first meetings were scheduled for 9 am.

And there we were again – at the beginning of day two, listening closely to MINC CEO Mårten Öbrink who’s showing pictures of Malmö back in the days, before they went straight digital. Öbrink was one of those transformators, everting the old building at the harbor site into a compelling mix of lab and workspace, incubator and event location for start-ups, with several programs to boost the macro-economy of the Skåne region. He proudly presented Orbital Systems by Mehrhad Mahdjobi, a young entrepreneur who invented a shower system with self-cleaning water. He already got 20 million US Dollars of investment.

Another start-up to check out is Hövding. The two bright minds of Anna Haupt and Terese Astir invented a bicycle helmet-necklace that blows up like an airbag. Then Pieter Lübeck of Game City Malmö told us about his plans to support the flourishing games community with a start-up academy, meet ups and more social tools. Lovisa Niklasson and Jeremie Poirier finally explained how they managed to build Frankalla, a service turning Instagram snapshots into high quality posters and other products.

That’s how 25h Malmö ended. Some of us had to leave immediately, buying some licorice on the way to Copenhagen Airport. It’s when you realize the short distance to Scandinavia’s biggest international airport in Denmark is a unique selling point for the Swedish region, even though Malmö is on the other side of Öresund. But that’s what bridges are for, and that’s what we’re trying to achieve with BerlinBalticNordic.net. Cooperation and easy accesses make sense. It’s really more than just a metaphor.

BerlinBalticNordic.net is a business and networking platform for the games and digital media industries, connecting the Berlin scene with the Baltic Sea and Nordic countries. The project is financed by the EUROPEAN REGIONAL DEVELOPMENT FUND and co-financed by the State of Berlin – Investing in your future!